Days of Love and Blood by R.S. Carter

A post-apocalyptic zombie book for women.

The Demon Virus spreads worldwide in a matter of days leaving nothing but a few uninfected people in its path along with disease-riddled survivors who possess homicidal tendencies.

Carson drives across the country, back to her parents’ farm, with her son Ronan to begin a new life in a post-apocalyptic world. There she discovers more uninfected people like herself and attempts to build new relationships after the devastating loss of her husband.

Two men distract Carson from her grief, each possessing different characteristics that she found, loved and needed in her husband. Cooper has a bad attitude but gives Carson the space she needs with his self-sufficient, independent ways. Ben panders after her but exhibits a kindness she appreciates. Neither of them embody all of which she lost in her husband’s death.

The need for human interaction intertwines with the daily struggle of tribulation, remorse and adjustment, revolving around the constant battles between the uninfected and the last remaining homicidal maniacs. Days of Love and Blood is a story which examines the bonds created between people in times of change with an unexpected shocking end that will have you questioning your own threshold for pain.

Inspired by a slightly obsessive addiction to my most recent muse, this is the culmination of the inspiration I received from the enigmatic character of Daryl Dixon.

Add Days of Love and Blood to your GoodReads To-Read list! 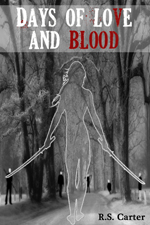